A process that starts with defining a desirable future and then working backwards to identify policies and programs that will connect the future to the present.

A use of two states or permissible values to represent data, such as ON and OFF positions of a light switch or transistors in a computer silicon chip that can be in either the electrical state of ON or OFF.

Binary data are typically represented as a series of single digits referred to as binary digits (or bits) due to each taking on the value of either 0 or 1. The image below shows how a dashed line might be represented in binary.

An inspiration of functions found in nature for use and adaptation in the design of a product, service or environment or to solve human problems. For example, velcro fastening was inspired by small hooks on the end of burr needles. Termite mounds that maintain a constant temperature through air vents inspired architects to design cooling for buildings.

Mapping something to bits (binary digits 0 and 1). It is most often used in reference to graphics or images (but can be other forms of media). For a bitmapped graphic, each ‘dot’, or pixel, of the graphic is represented by a number giving the colour of the pixel. .bmp, .gif or .jpeg files are graphics represented as bitmaps (as opposed to vector graphics). If a graphic were stored or displayed using only 1 bit per pixel, it would be purely black and white (1 for black and 0 for white). If it were 2 bits per pixel, it could represent four ‘colours’ (typically greyscale colours). Using 24 bits per pixel gives over 16 million (224) different colours.

Making a decision between one of two or more actions depending on sets of conditions and the data provided. For example, in testing whether a light works, the following algorithm uses branching: 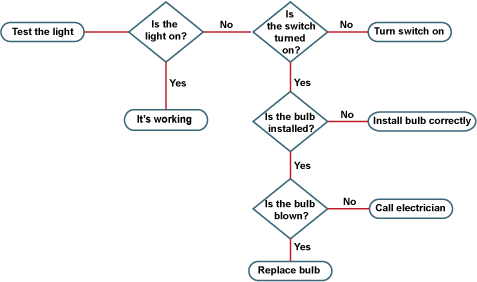 A traditional Japanese form of puppet theatre in which half life-sized dolls act out a chanted dramatic narrative using force and motion.