An application that uses the object-oriented programming paradigm to represent attributes and actions of a real-world object. An example is the use of Lego Mindstorms to provide instructions to determine the movement of a robot.

A programming language that supports the object-oriented programming paradigm. In object-oriented programming, objects represent a combination of data (the attributes of an object) and actions that can be performed on or with those data (the methods of the object). An example might be a declaration of a ‘car’, which has attributes that describe its physical nature (such as the number of doors, its colour, the size of the engine) and the actions it can perform (such as accelerating, braking and turning).

A simple online interface, such as a form on a website, that provides a way for a user to query a specified dataset. This could include a catalogue for a local library, or a website that allows searching of Creative Commons images.

A mixture of extra nutrients that are derived from sources which are or were living, to be added to crops and pastures. Examples include seaweed, blood and bone, manure and compost.

A scaled multiview drawing of a three-dimensional object to show each view separately, in a series of two-dimensional drawings, for example, top or bottom, front, back and sides. In Australia, orthogonal drawings use third-angle projection for layout of the views. Orthogonal drawings may also include measurements on each view and are used to develop lists of material requirements. In these drawings each edge is represented by a connected line, each segment of which is parallel to a coordinate axis. Also see production drawing. 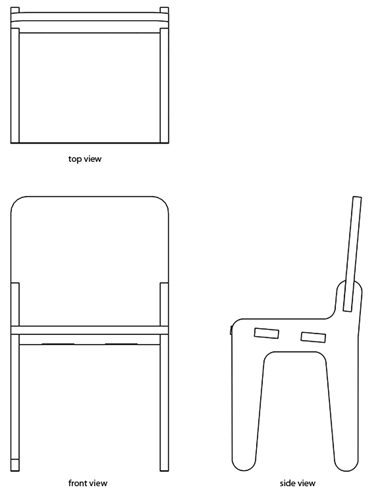 orthogonal drawing of a chair

A result of something (physical or virtual) such as power, energy, action, material or information produced by a person, machine or a system. Also see engineering principles and systems.