An angle is the figure formed by two rays sharing a common endpoint, called the vertex of the angle.

The size of an angle

Imagine that the ray OB is rotated about the point O until it lies along OA. The amount of turning is called the size of the angle AOB.

A revolution is the amount of turning required to rotate a ray about its endpoint until it falls back onto itself. The size of 1 revolution is 360o.

Let AOB be a line, and let OX be a ray making equal angles with the ray OA and the ray OB. Then the equal angles ∠AOX and ∠BOX are called right angles.

A right angle is half of a straight angle, and so is equal to 90o. 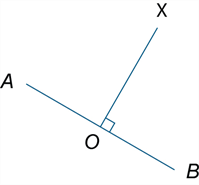 Angles are classified according to their size.

the intended group of readers, listeners or viewers that the writer, designer, filmmaker or speaker is addressing