Students were asked to translate into English an unseen Indonesian text provided by teacher. The Indonesian text contained topics studied during the course of the year e.g. description of self, family, likes/dislikes, hobbies/sport and home.

Students could choose the format of their translation.

By the end of Year 8, students share factual information and opinions about their personal and immediate worlds, including personal details, family, pets, friends, pastimes, school and neighbourhood. They interact with others orally and in writing, asking and responding to questions using Siapa, Apakah, Berapa, Bagaimana, Apa, Di/Ke/Dari mana…?, and expressing preferences using saya suka, kurang/tidak suka, mau/tidak mau. They pronounce the vowels and consonants such as c (ch) and r (trilled) and combined sounds such as ng, au. They use formulaic expressions (for example, saya tidak tahu, maaf, saya tidak mengerti, sekali lagi) to sustain interactions. Students describe qualities of appearance, colour, character and condition (such as tinggi, merah muda, lucu, panas), and identify quantities using numbers and fractions. They respond to and create texts to describe real and imagined events and characters. Students create personal, informative and imaginative texts incorporating textual features such as salutations and using cohesive devices such as conjunctions for example, dan, tetapi, karena and untuk. They form sentences with subject-verb-object construction (for example, Saya mau bermain sepak bola), typically using simple base words (for example, makan, minum, naik, bangun), ber- verbs (for example, bermain, belajar, berenang, berdansa, berlari) and formulaic me- verbs (for example, menonton, mendengarkan). Students refer to others using pronouns such as saya, kamu, dia, mereka, Bu/Pak, and use these in possessive form, including using -nya (for example, sepatunyatrendi). They refer to events in time and place using the prepositions pada, di and ke as well as time markers such as sebelum/sesudah, yang lalu, and depan. Students predict meaning based on knowledge of their first language, text features and key words, including loan words from English. They translate texts, identifying culture-specific language such as vocabulary related to cultural artefacts (for example, gayung, becak, warung), environment (for example, sawah, desa, cicak), and practices (for example, Idul Fitri). Students describe their experiences of using Indonesian and views about how it fits with their sense of self.

Students know that Indonesian is a language used by millions of Indonesians in daily life and that it is constantly changing. They know that Indonesian uses a base word and affix system and they use metalanguage to describe and compare features and rules of sentence construction including the use of possessives and adjectives. Students identify textual features such as salutations, conversation markers and sequencing devices. They know that spoken and written forms of Indonesian can vary, for example, the elision of pronouns and some verbs in speech. They identify when language changes according to people and their relationships, such as informal language with friends (for example, kamu, nggak, hebat) and formal language with teachers and adults (for example, Anda, tidak, baik sekali). Students make connections between aspects of their own language and culture, such as particular expressions or practices, and compare these with Indonesian language and culture. 1 Annotation 1
Interprets Indonesian text into English, maintaining the meaning of the original text 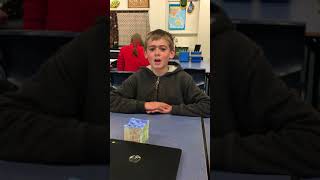 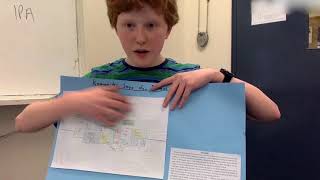 My house and community 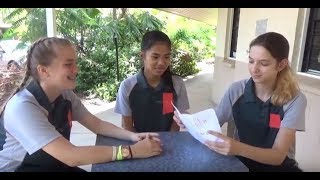