Students learnt the basic language of self-introduction, adjectives of colour and how to form simple sentences in German.

In this task, students were asked to write a short text about themselves and include information about their name, age, hair colour, eye colour and their hometown. The sentences were modelled.

By the end of Year 4, students interact with teachers and peers in classroom routines, action-related talk and play. They respond to instructions and use formulaic expressions to interact, ask questions, seek assistance, and make statements related to their personal worlds, for example, bitte schön; Ich bin dran; Welche Farbe? Wie viele Geschwister hast du? Mein Lieblingsspiel ist Lotto. They reproduce German short and long single vowel and diphthong sounds, including Umlaute, and Eszett, and initial consonants and blends, for example, Post/los, mein, die, Bruder/Brüder, heißen, ja, rot, singen, Sport, Winter, zwei. They answer questions related to their personal worlds with factual information, and respond to imaginative texts by identifying favourite elements, sequencing main events and producing short scaffolded summaries. They create short, simple sentences from modelled language and use coordinating conjunctions, for example, und, aber, oder, to compose short original texts. They use some forms of common regular verbs in the present tense, (for example, heißen, kosten, spielen, wohnen), some irregular verb forms, (for example, bin, bist, ist, sind, hast, hat), and limited forms of modal verbs, (for example, kann, mag, möchte, muss), simple past tense verbs, (for example, hatte, ging, war) and the accusative case, (for example, Ich habe einen Hund.). They respond to and use interrogatives, such as was, wann, wer, wie, wie viele, wo and some ja/nein questions. They refer to time, manner and place using familiar words and phrases, for example, morgen, sehr gut, im Wald. They compare aspects of German and English language and culture that are reflected in texts they have viewed, listened to or read and they create texts in German and English for the classroom and school community. They identify ways in which culture influences aspects of communication in routine exchanges such as greetings, and describe their own sense of identity, including elements such as family, cultural heritage and friends.

Students identify German as an important European and global language and give examples showing how it is related to English. They differentiate statements, questions, imperatives and exclamations according to intonation, sentence structure and punctuation. They identify the purpose of the Eszett and show how the Umlaut alters the pronunciation of particular vowels (ä, ö, ü). They identify single letters, some consonant clusters (sch) and vowel combinations (au, ei, eu, ie). They identify the audience and purpose of familiar personal, informative and imaginative texts. They give examples of how language use varies according to the participants, purpose and context of an exchange. They give examples of how language and culture are intrinsically linked, and identify cultural values, traditions or practices that are conveyed in words and expressions they and others use. 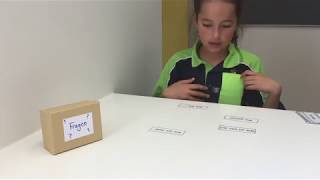 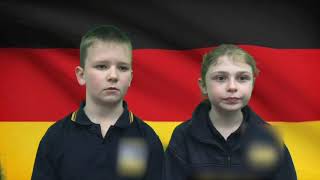