Students learned to read hiragana characters including long vowel sounds, voiced sounds, blended sounds and basic kanji. Working at their own pace and level, students were asked to read a self-introduction script about an imaginary character, Shinji. Over a 7-week period, students were asked to read the script which increased in complexity and length. The final level required students to replace Shinji’s personal information with their own, forming a personal self-introduction using the scaffolded sentences.

By the end of Year 4, students interact with the teacher and peers in regular classroom routines and structured interactions. They understand andrespond to instructions related to classroom organisation and activities, for example, ペアになってください。大きいこえでいってください。. They use formulaic and rehearsed language to exchange information about their personal worlds and in familiar interactions such as praising or encouraging one another, for example, がんばって. They use language spontaneously in simple familiar communicative exchanges, for example, やったー！だいじょうぶ？. They respond to simple questions using short spoken statements, for example, いつですか。なにがすきですか。. They use counter classifiers in response to questions such as なん、なん、なんじ、なんさい. Students identify specific items of information, such as facts about or key characteristics of people, when listening to or viewing texts such as short stories, weather reports or video clips. They use cues such as context, visual images and familiar vocabulary to assist comprehension. They create short spoken informative and descriptive texts related to their personal world with the support of modelled language, scaffolded examples and resources such as word lists. They describe people and events using adjectives, time-related vocabulary and appropriate verb forms, such as ます、ましょう、ました and ません. They read and write the 46 hiragana, including long vowels (for example, おとうさん、おおきい), voiced sounds (for example, かぞく、たべます), and blended sounds as formulaic language (for example, きょう、でしょう), as well as high-frequency kanji such as 月、日、先生. They apply word order (subject–object–verb) in simple sentences. They comprehend short written texts such as captions, labels, signs and stories that use familiar and repetitive language. They translate simple texts using classroom resources such as charts or word lists, noticing that some words and expressions do not translate easily. Students identify examples of cultural differences between ways of communicating in Japanese and in their own language(s).

Students identify both vowel and vowel–consonant sounds of hiragana, recognising that vowel sounds can be elongated and that this can change meaning. They identify ways in which rhythm is used to chunk phrases within a sentence. Students use the hiragana chart to support their reading and writing, recognising its systematic nature. They demonstrate awareness of the predictable nature of pronunciation. They know the role of particles, for example, は、を、と、も、に; the rules for simple verb tense conjugations; and how to create questions using the sentence-ending particle か. They understand and use the rules and phonetic changes that apply to counter classifiers, for example, はっさい、ひとり、ふたり. They identify language variations that occur according to the age and relationship of participants, and according to the situation, for example, なまえ/ おなまえ、はし/ おはし. They demonstrate their understanding of the importance in Japanese of non-verbal communication such as the use of gestures, for example, bowing to replace words and to communicate meaning. Students identify ways in which Japanese language reflects ways of behaving and thinking. 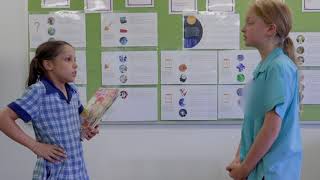 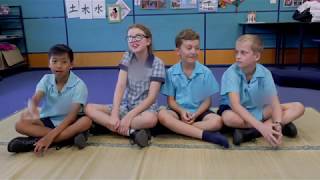