In this task, students were asked to imagine that they meet a friendly alien. Students were to create, introduce and describe the alien friend using a range of vocabulary and grammatical structures.

By the end of Year 8, students use Korean to interact with each other and teachers in classroom routines and activities, exchanging greetings, wishes, experiences, interests and information. They approximate different sounds and intonation patterns of Korean during spoken interaction, and construct and combine Hangeul syllable blocks appropriately to write words and sentences. They greet each other using formulaic language (for example, 안녕하세요?; 만나서 반가워요; 안녕히 가세요/계세요) and exchange basic personal information. They ask and respond to simple questions using an –이에요/예요 or –어/아요 verb ending appropriately (for example, 13살이에요; 이것/저것이 뭐예요?; 뭐 (무엇을) 해요?; 수영해요). They maintain interaction by using formulaic expressions or set phrases to give simple feedback (for example, 알아요/ 몰라요, 네/아니요, 맞아요/틀려요) and to offer their own opinions (for example, 제 생각에 는/으로는 ...이/가 맞아요). Students give and follow simple instructions such as 일어나세요, 앉으세요, ..., make simple arrangements (for example, 같이 가요, 언제 만나요?) and engage in transactions such as making and responding to polite requests (for example, 아이스크림 주세요). They negotiate wishes and express possibility or capability using set phrases (such as ...–고 싶어요, ...–(으)ㄹ 수 있어요). Students use familiar vocabulary to describe familiar objects, people, pets, routines and contexts (such as 책, 사과, 빨간색, 아버지, 어머니, 고양이, 월요일, 화요일, ..., 주말, 학교, 집) and appropriate grammatical elements such as basic case markers and particles, for example, –은/는, –이/가, –을/를, –에, –에서, –하고 and –(으) 로 (as an instrumental case particle) in simple sentences. They describe present and past events (for example, 영화가 재미있어요; 영화가 재미있었어요) and express aspects of action or appearance in set phrases (such as ...–고 있어요, ... 같아요). They ask questions using a range of question words, and make negations by using 안/못 for common verbs and by replacing copula ...이에요/예요 with a set phrase ...이/가 아니예요. They describe quality or state (for example, 좋아요, 예뻐요, 재미있어요/재미없어요, 커 요/작아요, 맛있어요/맛없어요) and action (for example, 가요, 먹어요, 좋아해요, 공부해요), and use a suffix –었/았– for past events (for example, 갔어요). Students refer to themselves using different forms of first person pronouns (for example, 저, 제, 나, 내, 우리) appropriately and refer to objects using pronouns 이것, 저것 or 그것 according to the context. They use some honorific words and suffixes as part of formulaic expressions (for example, 드세요, 선생님). They express numbers using pure Korean and Sino Korean number systems, basic counters and Arabic numerals with appropriate pronunciation, in appropriate word order (for example, 사과 한 개, 학생 세 명, 12살, 8 학년). They create texts using modelled sentence structures, formulaic expressions and set phrases. They build text cohesion by using basic qualifying adverbs (such as 아주, 잘, 빨리, 같이), time adverbs (such as 어제, 오늘) and basic conjunctives (such as 그리고, 그러나) and by maintaining consistency in the use of polite verb endings and honorific elements. Students translate texts, predicting meanings by relying on knowledge of their first language , of textual features and of key words, including loan words from English. They simple bilingual texts in different modes and formats, identifying culture embedded language such as 우리 used in the context where it means ‘my’ in English (for example, 우리 집, 우리 선생님). They compare their experiences of learning and using Korean, identifying how the experience of learning Korean has broadened their intercultural perspectives and understanding of other cultures.

Students describe how Korean is used not only in Korea and in the Korean community in Australia but also in the global context. They explain how languages and cultures change through contact by giving examples of Korean words known and used in other languages, loan words in contemporary Korean borrowed from English, and words with similar meanings or pronunciation across languages such as Korean, Chinese, Japanese and some European languages. They demonstrate their understanding of the alphabetic nature of Hangeul by identifying consonant and vowel letters and explaining how to combine them to construct a syllable block and explain how Hangeul was created to correspond to the Korean sound system. Students explain basic features of Korean and English using metalanguage and applying their understanding of rules for writing Hangeul, for pronunciation, for grammar and for text organization in Korean. They identify how politeness is expressed explicitly and systematically through grammar and vocabulary in Korean and describe how the level of politeness in speech style is determined by the age and social relationships of participants in interactions in Korean. They describe how the spoken and written forms of a language change over time for example, by differentiating between older and modern versions of Hangeul script. They demonstrate their understanding of the close relationship between language and culture by describing how Korean language reflects ways of thinking and behaving associated with Korean people and their lifestyles. They adjust their language use to suit situations and contexts and use nonverbal elements in culturally appropriate ways when using Korean. 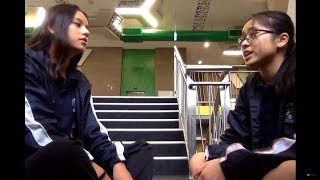 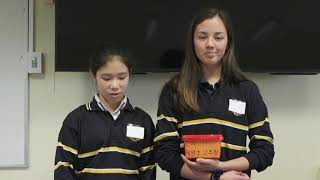 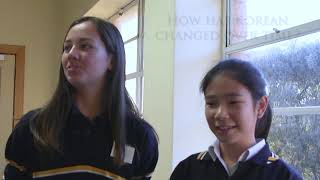 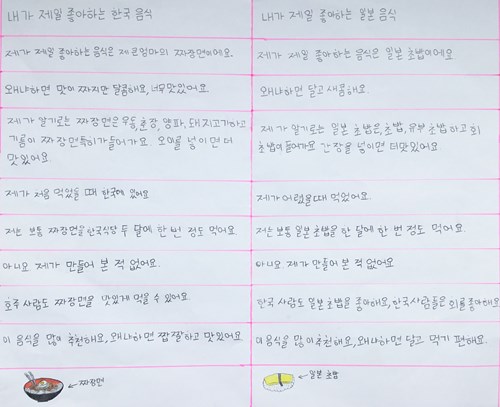 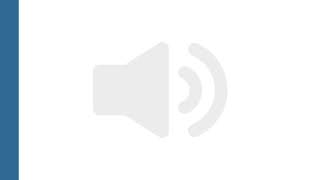