Students learnt about celebrations and traditions and how to create texts to express thanks and appreciation. Students discussed the role of mothers/carers in the family and in society, and their own personal response to the role. Students had previously learnt how to talk about family members, express likes/dislikes, wishes, desires and to thank people.

In this task, students were asked to write a letter to their mother/carer on the occasion of Mother’s Day, to express their personal reflection on their significance to them.

By the end of Year 6, students use spoken and written Vietnamese for classroom interactions and to share ideas and opinions and express feelings. They exchange information about aspects of their daily life, school, friends and leisure activities. They make shared decisions and arrangements, organise events and complete transactions. When participating in classroom and collaborative activities, they ask and respond to questions, and express opinions, for example, Bạn thích ăn cơm hay phở? Tôi thích ăn phở vì nó thơm ngon và bổ. Students use specific features of pronunciation and intonation, including tones, when interacting. They locate, classify and compare information from a range of familiar texts, and share information and ideas on topics of interest in paragraphs or short texts selected to suit different audiences. They respond to imaginative texts by describing key elements, and create short imaginative texts or alternative versions of texts they have heard, read or viewed. Students use everyday language and topic­specific vocabulary to express ideas and opinions and discuss events in time and place. They construct sentences using nouns, pronouns, adjectives, adverbs and familiar expressions and idioms (for example, đen như mực, hiền như Bụt, có công mài sắt có ngày nên kim), to suit the context and purpose of communication. Students use simple sentences and form compound sentences using conjunctions such as và,hay/hoặc, vì, nhưng, nên. When writing, they apply appropriate spelling and punctuation in a range of sentence types. Students translate simple texts from Vietnamese into English and vice versa, identifying words that are easy or difficult to translate, and create bilingual texts for their own language learning and for the school community. Students identify ways in which their family origins, traditions and beliefs impact on their identity and influence how they communicate in Vietnamese and English.

Students form new words by adding or changing tone markers, initial consonants and vowels (for example, buổi, cuối, đuổi, tuổi, chuối), and identify how changes to pitch affect the meaning of words, for example, thương, thường, thưởng, thượng. They compare the structure and language features of familiar texts and identify ways in which audience, context and purpose influence language choices. They identify ways in which language use varies according to context and situation, for example, Chào các bạn. Kính thưa thầy/cô. Students provide examples of how the Vietnamese language has changed over time and identify ways in which regional dialects and accents have influenced the language, for example, dialectal variations such as bố/ba, mẹ/má, cái thìa/cái muỗng, Em tên gì?/Em tên chi? Đi đâu?/Đi mô? They identify language choices that reflect the influence of Vietnamese values and beliefs, and apply culturally appropriate behaviours and language when communicating in a range of familiar situations. 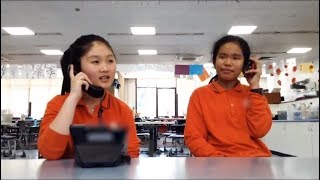 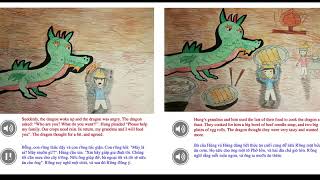 Hung and the Dragon