There are three parts to this task:

Students were asked to recite the poem imitating correct pronunciation, rhythm and intonation.

Students were asked to recite a poem of their choice imitating correct pronunciation, rhythm and intonation.

By the end of Year 2, students interact with teachers and each other through action-related talk and play. They exchange greetings such as Bonjour! Comment ça va? Très bien, merci and respond to question cues with single words or set phrases such as Qu’est-ce que c’est? Un éléphant. Tu veux un croissant? Non, merci. They choose between options when responding to questions such as Tu veux le rouge ou le bleu? They make meaning using visual, non-verbal and contextual cues such as intonation, gestures and facial expressions. They mimic French pronunciation, approximating vowel sounds and consonant combinations with some accuracy. They identify key words in spoken texts, such as names of people, places or objects. They use modelled examples and formulaic language to convey factual information at word and simple sentence level, such as making statements about themselves, their class and home environment, the weather or date. They write simple texts such as lists, labels, captions and descriptions. Students use some pronouns, prepositions and simple present tense forms of regular verbs.

Students identify ways in which spoken French sounds different to English and know that it uses the same alphabet when written. They identify words that are written the same in both languages but pronounced differently. They know that French is the language used in France and also in many other regions of the world. They know that language is used differently in different situations and between different people. They identify differences and similarities between their own and other’s languages and cultures. 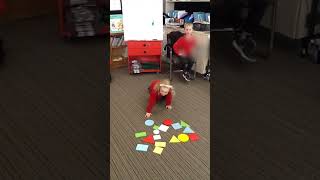 Introduction of self and friend