After completing the task, students were asked to participate in a group discussion about Japanese and Australian classrooms and school life and write an English reflection that focused on the potential challenges they may face if they were to attend a Japanese school.

By the end of Year 8, students interact with one another and the teacher in classroom routines and activities, exchanging greetings, wishes and information about their personal and social worlds. They use gestures and formulaic expressions appropriately, for example, おくれて すみません。しつれいします。 They comprehend and respond to familiar questions, such asだれ、何、 どこ、 いつ、何よう日、 どんな、 and instructions, such as たって ください。三人の グループに なって ください。、 using rehearsed and some spontaneous language. They ask for assistance and clarification, for example, ～は 何 ですか。十四ページ ですね。. They pronounce voiced and unvoiced sounds, long vowels, blends, double consonants and high-frequency loan words with developing rhythm and intonation. They read and write texts in hiragana and katakana, with some kanji for numbers, days of the week and high-frequency nouns, adjectives and verbs, such as人、先生、日本、大きい、小さい、友だち、行きます、食べます. Students identify key points of information in short predictable written, spoken and multimodal texts, understanding descriptions of people, objects, places and activities. They use non-verbal, visual and contextual cues to assist in making meaning. Students use rehearsed language related to their personal world to convey information in both written and spoken texts. They produce short sentences involving nouns, verbs (for example, 何を しますか 。ゲームを します。), common counter classifiers (for example, ～人、 ～ひき、 ～さい), and adjective, noun and verb predicates. They apply correct stroke order to all characters, and use appropriate punctuation and textual features in texts such as captions, greeting cards, profiles, emails or timelines. They structure sentences using correct word order, and link information using conjunctions such as そしてandそれか ら. They translate and interpret short spoken texts, explaining Japanese gestures and expressions that do not readily translate into English, for example, はじめまして、どうぞよろしく。. They adjust their language to suit different contexts and situations, for example, the use of appropriate titles and forms of address, and respond in culturally appropriate ways to interactions with other Japanese speakers, such as bowing when greeting, and using appropriate eye contact.

Students recognise the nature and roles of the three Japanese scripts, understanding that hiragana represents the basic unit of Japanese sound, kanji represents meaning, and katakana is used for borrowed words. They use the hiragana and katakana chart as a tool when writing and reading, recognising their systematic nature. They know that hiragana and katakana are pronounced identically and that the pronunciation of borrowed words is determined by the Japanese sound system. Students
understand and apply grammatical concepts such as the use of particles, for example, の、 へ、 に、 で、 と、 も、 が、 は、 を、か、 よ、 and conjugation of present, past, positive and negative forms of verbs. They understand and use いand なadjectives, and apply the rules of counter classifiers such as ～人、～月、 ～ひき/びき/ぴき. They explain how language and behaviour change according to participants, context and relationship, and that politeness and respect are expressed explicitly in Japanese through greetings, vocabulary, formulaic expressions and actions. They understand that languages and cultures change over time, and provide examples of how languages borrow words from one another. Students make connections and comparisons between elements of the Japanese language and culture and their own, identifying how languages reflect ways of thinking and behaving. They identify how Japanese values such as humility and harmony are reflected in language, such as by deflecting praise, for example, じょうず ですね。いいえ。、 softening responses with expressions such asちょっと or あんまり、 and using indirect forms of refusal or disagreement. 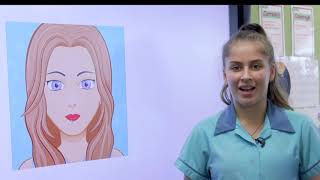