By the end of Year 2, students use spoken and written Chinese to communicate with teachers and peers. They participate in structured and routine interactions, such as using 谢谢， 再见， 请, using learnt sounds, formulaic phrases, and verbal and non-verbal responses. They respond to and receive information, for example, 你好， 你好吗？ They follow simple instructions, including 排队， 请坐， 不要说话.. They use the four tones of Chinese but not always with accuracy. Students respond to short predictable imaginative and informative texts, expressing simple likes and dislikes (喜欢， 不喜欢). They can match characters to the meanings and sounds of familiar words, including numbers (八…), colours (红…) and family members (爸爸， 妈妈). Students use strategies such as imitation and basic contextual cues for comprehension. They create simple informative and imaginative texts by selecting and practising learnt characters and familiar words and phrases to describe, list, label and caption. 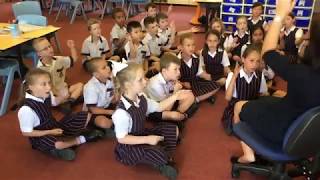