This portfolio of student work shows that the student engages in classroom interactions to carry out collaborative tasks, to exchange information and to express feelings and ideas related to specific contexts, personal interests and daily routines at home and school. The student asks and answers questions with appropriate intonation and gestures, changing sounds on syllable boundaries in a word as appropriate. The student uses simple structures for a range of functions, including making simple arrangements and conducting simple transactions, and some complex structures as set phrases to ask for permission and to offer their own opinions (WS3). They use particles (WS3) such as –(으)로, –하고 and –에서 as part of a set phrase (a noun/pronoun + particle) to indicate instrument, accompaniment, and location (WS1, WS2, WS3). The student describes two events occurring in sequence, such as daily routines, using two sentences with a 그리고 at the beginning of the second sentence or the –고 coordination, and past experiences using a suffix –었/았– (WS1, WS2). The student negates statements (WS1, WS3) and constructs questions about reasons, prices and opinions/feelings, using set phrases such as 왜요? 얼마예요? and 어때요?/어땠어요. The student uses descriptive language, and manner and time adverbs (WS1, WS2). The student describes amounts of familiar items, including currency and time, using number words from either the pure Korean or the Sino-Korean number system in their appropriate forms, with a range of counters (such as 장, 잔, 권, 그루, 송이, 원, and 시) and in appropriate word order (WS3). The student pronounces Arabic numerals appropriately according to the accompanying counters (for example, 10살, 6학년). The student locates specific information in a range of familiar spoken, written and digital texts, identifying familiar vocabulary and grammatical features to support understanding. The student uses simple and formulaic language with the support of structured models and scaffolding to create short texts with familiar structures and features, in various modes and formats (WS1, WS2, WS3). The student translates texts between Korean and English in familiar formats, and creates their own simple bilingual texts, using known words and expressions. The student provides extra information or explanations for words or expressions that have no equivalents in the other language or cannot be readily translated, such as 벼 versus ‘rice as a crop’, 쌀 versus ‘rice as raw grains’ and 밥 versus ‘cooked rice or meals’. The student identifies aspects of Korean language in which Korean culture is embedded, such as politeness embedded in –(으)세요.

Students differentiate between spoken and written forms of Korean by applying their understanding of rules that govern pronunciation and writing using Hangeul syllable blocks, and by associating spoken forms of known words with their written forms (WS2). They change verb forms using suffixes such as –었/았– and –고 by applying their understanding of grammatical elements that affect different grammatical meanings and functions (WS1). They identify the topic/subject and the object in simple sentences and explain how word order in Korean is different to English using basic metalinguistic terms such as word order, subject, object and verb (WS1). Students identify distinctive features of familiar spoken and written texts in different genres, such as language used at the beginning or closing (for example, …에게/께; …(으)로부터/올림), and relate them to distinctive purposes, intended audiences and social contexts of texts. Students apply their understanding of the importance of context, age and social relationships in language use during interaction, and identify age as particularly important in determining the level of politeness and formality in using Korean (for example, 미안합니다 versus 미안해요 versus 미안해) (WS1). The student provides examples of how spoken and written forms of language change over time, and explains how Hangeul was initially created and continues to change. The student explains how languages borrow words with culture-specific meanings from each other and provides such examples from Korean words borrowed from English and other and Korean words used in Australia (for example, 비빔밥 (bibimbap), 아리랑 (arirang)). The student provides relevant comments on how language is used to influence people’s perceptions, and identifies their own ways of thinking about Korean associations such as brand names or names of cultural items. The student compares gestures or body languages involved in communication using Korean and other languages and identifies similarities and differences across cultures. The student provides examples where direct translation is not possible, such as terms or expressions that reflect cultural practices, and determines whether their equivalents exist in their own language/s. 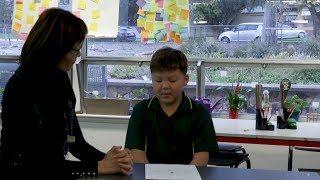