This portfolio of student work shows that the student uses Korean to interact in classroom routines, action-related talk and play with teachers and peers (WS3). The student exchanges personal information relating to aspects such as age or interests, using simple questions and short statements as set phrases. The student uses formulaic language to express rapport with others and responds to instructions for familiar classroom routines and activities taking required actions and to simple questions with set phrases ending in –이에요/예요 or -어/아요 (WS3, WS4). The student asks for repetition and for a turn to ask a question and negotiates requests using simple language. The student identifies key words or topics from simple oral, visual and written texts, using cues such as context, graphics, familiar vocabulary and language features to support understanding (WS1, WS2, WS4). The student presents simple information in texts in different formats and creates and performs their own texts with the support of modelled language and other resources (WS1, WS4). The student approximates the sounds, rhythms and intonations of spoken Korean and writes familiar words in Hangeul with some accuracy (WS1, WS2). The student creates simple sentences in their speech and writing, using basic case markers and a particle as an inseparable part of a formulaic structure: a noun/pronoun + a case marker/particle (WS1, WS2, WS3, WS4). The student uses common action verbs and descriptive verbs as part of formulaic expressions ending in –어/아요 (WS1) or its honorific form –(으)세요, varying intonation contours for statements, questions (with or without a question word), requests or commands. The student asks simple questions about people, objects or numbers, using question words. The student uses contractions of demonstrative pronouns and –이as formulaic chunks, and vocabulary related to school, home and sports and leisure activities. The student uses vocabulary for major colours and number expressions, choosing between native Korean and Sino-Korean number systems up to 10 as appropriate, using counters to describe ages, school years and numbers of objects, animals, or people (WS1). The student matches known Korean words or expressions with their English equivalents and creates simple bilingual texts of familiar objects with support (WS1). The student understands that meaning may change through translation across languages and exemplify words that could be translated differently according to context (WS1). The student identifies different social networks they belong to such as clubs or language-speaking communities and compares their past and current intercultural capability with reference to the experience of learning Korean. 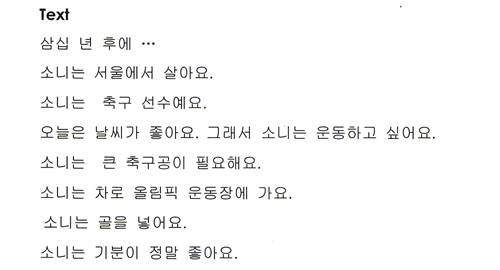