This portfolio of student work shows that the student can interact in classroom routines and structured interactions with teachers and peers (WS1). The student reproduces the sounds of au (for example, mau) and g (for example, gemuk) and the final sound k (for example, tidak) (WS1).  The student follows instructions (such as Duduklah or Bukalahbukumu), makes requests and responds with actions (WS1). The student responds to questions such as Di mana? Kapan? Apakah?, by using simple phrases (WS1). The student engages with texts, relying on graphics, key words and examples to support understanding, and responds using formulaic language (WS1). The student presents factual information in texts through, for example, describing (WS2), listing and using tables. The student works with modelled language to create his/her own texts (WS1), such as sequencing pictures and statements to create a comic and using word lists to complete a paragraph or simple story (WS2). The student uses vocabulary related to school (such as buku, pensil, kursi), home (WS2) (such as rumah, kamar, mobil) and some interests (such as suka main komputer, berenang, naik sepeda) to create simple informative and descriptive texts. The student describes amounts using cardinal numbers with belas and puluh (WS1), and creates plurals by doubling nouns. The student states preferences using Saya [tidak] suka…, and uses adjectives, including adjectives of size and colour (for example, besar, merah, tinggi, lucu), following the noun (WS2). The student creates subject-focus sentences, and uses simple possessive word order (WS2) such as teman saya or rumahnya, the prepositions di and ke, and the conjunction dan. The student translates texts using word lists and dictionaries, identifying words and expressions that do not have word-to-word equivalence, such as ‘footy’ or becak. The student observes how language use, including his/her own, is influenced by culture and notices how it can influence intercultural experiences (WS1).

The student differentiates statements from questions according to intonation (WS1). The student states that possessive word order in Indonesian differs from English (WS2). The student knows that language use varies according to who is using it and with whom, such as kamu for friends and Bu/Pak for teachers, and that some terms have specific cultural meanings, such as pronouns derived from family terms (for example, Bapak/Pak, Ibu/Bu) (WS1). The student makes comparisons between Indonesian and English, particularly identifying similarities and differences in cultural practices related to daily routines and special occasions. 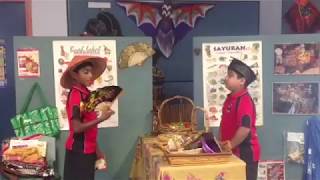