Years 5 and 6: Making time for multimedia

This classroom idea begins with an exploration of multimedia or multimodal texts. Students then use multimedia technologies to make and share works, products and texts.

In the creation of all multimedia works, time is fundamental, both as a technical consideration to plan, create and refine the work as well as a story convention to decide how events are represented to either inform, persuade, entertain or educate an audience.

A vast range of forms can be used to create multimedia or multimodal works. This work can be undertaken individually or in groups.

Click here to find out about media forms and multimedia products under the 'Multimedia in the Australian Curriculum' menu.

One place to start working in multimedia is to ‘reverse engineer’ an existing work. This requires students to unpack the technical and symbolic elements in a media form and identify the conventions and story principles used to combine them in the selected text.

All multimedia works have their own characteristics. However, they are all constructed from a common list of elements that use new and emerging conventions and are decoded by audiences to make meaning.

Multimedia can convey factual information to create emotional engagement. Students can identify the cognitive and emotional effects that a text has on audiences. Individually or in groups, students explore a scene or sequence from a multimedia work and discuss how it conveys meaning to an audience. The recipe of a scene

Individually or in a small group, students select or are assigned a multimedia or multimodal work and identify a characteristic scene.

Next, they reflect on the cognitive and emotional effects this scene has on an audience. They consider how the technical and symbolic elements contributed to these effects. These ‘ingredients’ will reflect the conventions and story principles used to convey meaning.

Some questions to ask at the start of this inquiry:

Once students have identified the effect of a particular scene and how it informs, persuades, entertains or educates an audience, they can begin to reverse engineer more details of the ‘recipe’ that led to this effect.

Some questions to ask students at the start of this inquiry:

To present their ‘recipe’ (responses to these questions), students might Now it’s time to give students an opportunity to test their recipes. Ask them to start by creating a scene that uses specific genre conventions from fictional or informative multimedia works. Students might like to try their hand at becoming the next Jane Campion or Michael Moore, a process that requires a lot of planning and coordination. Start small and work up.

In groups, students work together to replicate a particular convention or story principle from a selected multimedia work. They plan, produce and present a short scene to demonstrate their understanding of technical and symbolic elements and the conventions used to combine them for a particular effect. 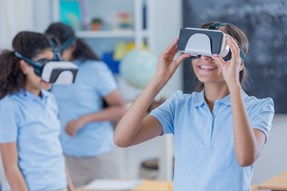 Building on their analysis, students follow the recipe they devised and reverse engineer a scene to create a new one.

To do this, they work in groups to document a plan and process for making a short production which can be screened to an audience when completed.

Organisation of time is everything in a multimedia or multimodal production. Each member of the group is assigned specific duties. These can be roles like ‘director’ or ‘camera operator’ or roles such as ‘runner’, ‘opening titles designer’, ‘composer’ or ’floor manager’. Students can take on multiple roles across the stages of the production. For example, a director might oversee the draft of a short script, even though many people in the group will collaborate in its writing.

Once all the roles have been decided, the group can begin documenting their project, either digitally and/or on paper. Planning, also called pre-production, is when the main concept is devised and turned into documentation that outlines what will be created. Key documents and decisions that should be made in this stage are: script, storyboard, wireframe, interview questions, casting, locations, sets, costumes and what technology (cameras, sound recorders, lights, computers) will be used to capture the story.

Production is when the group works together to film, record or make the various elements that will comprise the final product. Managing the equipment is crucial, as is the organisation of the digital files that are created. Keeping production calendars and diaries is a good idea, as is making sure there is someone in charge of the production timeline.

Post-production is when all the elements are brought together and the choices about how particular conventions will be created are made. In this stage there are many cycles of editing, testing and refining sequences and combinations of image, video, text, sound and animation. Although one or two key editors might complete most of this work, the entire group still has an active role in reflection. Be aware that parts of this production may need to be re-shot or re-made and that this work can be done even as the product nears its final edit.

Distribution is where a product is exported, compiled or rendered into its final format that can be shared. Organise a screening of the final products to celebrate all the work. This can include final peer-reflection or audience feedback as a way of measuring the success of the intended cognitive and or emotional effect identified in the plan.

When you are ready to go into a longer multimedia project, one place to start is to look at how the narrative element of ‘time’ can be represented in a multimedia story. All stories are told over time. How events are selected and presented in a sequence influences the way an audience experiences the narrative. 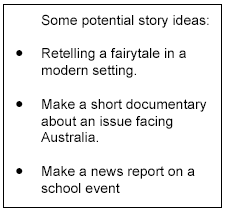 In small groups or individually, students devise an outline for a story or plan how they can tell a known story. For example, teachers might provide a subject for a documentary or a topic for a news report or segment from a class novel. Students discuss what details are important, and which could be left out. Next, they represent these selected moments in a storyboard, and then explore all the ways time can be manipulated in a multimedia product to tell the story.

Sample conventions of time in multimedia works might include:

Using the roles from the Making time to replicate (above) project as well as the production timeline, each group plans a small multimedia work in response to a specific idea.

Life in a minute

Can you tell the story of a life in 60 seconds?

Students work together to select a subject (person, place, object) from their community whose life story will be represented in one minute of time. How to shoot a video interview – ABC education

Setting up equipment for a video interview – ABC education

Links to the Australian Curriculum

Table 1:  Links from the task to the Australian Curriculum:

For further information, see the Student Diversity pages on the Australian Curriculum website.

These resources may be useful when planning teaching and learning programs.  ACARA advises teachers to use their own judgement about the value of the resources for their teaching context. Teachers are encouraged to use the list as a starting point to identify further resources.

Years 5 and 6: Making time for multimedia