An angle is the figure formed by the rotation of a ray about a point, called the vertex of the angle. The size of an angle is usually measured in degrees (°). 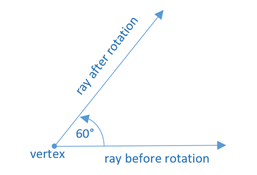 There are different ways of depicting and naming angles. Angles may be depicted using as symbol such as an arc, a dot or a letter (often from the Greek alphabet). Angles are named using different conventions, such as the angle symbol ∠ followed by three letters denoting points, where the middle letter is the vertex, or using just the label of the vertex. 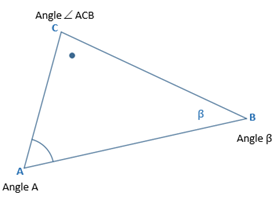